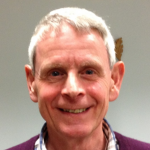 At the March AGM, Paul Shaw formally became our new Treasurer and also a Trustee.

Paul was a partner in the accountancy firm Myers Clark for many years, and even before retirement, held the position of voluntary Treasurer with the Citizens Advice Bureau (CAB) in South Oxhey.

In 2005, the three CABs within the Three Rivers area merged to form one larger charity and Paul became the new organisation’s Treasurer. More recently, Paul has taken over as Three Rivers CAB’s Chair so is no stranger to the voluntary sector or indeed some of the challenges facing clients in our area.

In a regulatory climate where charities are required to adopt similar processes and practices to commercial businesses, it’s great to have Paul on board on so many counts!